Acclimating Shrimp- Preparation to add shrimp to a freshwater tank Is there ever a time that you moved from one place to another? Have you switched jobs and had to deal with a new work environment? How does moving to a new neighborhood feel? In all aspects, people and animals have that in common, moving to a new environment is usually life-changing because of simply how to react to that new environment and how to cope with the new change. Animals have that feeling too! The change in living conditions and environment simply affects how people or animals act, how bodily functions work and how the attitude simply changes with the introduction of something new.

As something needs to start somewhere, the focus will be mainly on how shrimp owners need to prepare before adding the shrimp to a tank which is not the marine animal’s natural habitat which can aid the shrimp to get itself ready to permanently be in the shrimp tank. The owner must need to take into account that before the shrimp gets to be added to a tank, there are a handful of things needed to be done to make sure that the shrimp will not have problems with its new man-made habitat and do not get that much stress, shorten life expectancy, chances of not eating and eventually die.

Take note that the process will involve planning ahead of time on how to get the acclimatization done is crucial. The length of travel time from LFS to where the tank is at, the temperature change while traveling, etc. will be part of the entire process.

The introduction of shrimp to a tank is stressful to them and plays a big factor that will cause its life if not handled correctly. The guidelines of how a new shrimp owner will handle that will be highlighted from start to finish so nothing will go wrong with the new shrimp tank setup.

Note: An easy determiner when shrimp is stressed is when its normal color gets faint. Aquarium or the shrimp tank

The tank is the most basic need when starting an aquarium, so the need to determine the size first will also determine how the entire setup would be. The bigger the size, the more you can fit according to how you want to make your setup appear and, more importantly, that there will be living creatures that depend on the setup, so thinking ahead is the key.

It is of great importance when operating a tank to test its water for any chemicals like ammonia or nitrite to keep the tank healthy for the shrimp to live. There are a lot of options to choose from if the owner wants to get the best choice that will work as in time, it can get costly. This water test kit can be in the form of strips that react to water chemicals or some kits mechanically that can easily determine the water composition. As shrimp does not adjust easily in sudden temperature changes, it is a must-have to include a thermometer when setting up a tank. Not only that, but temperature can be manually regulated if there is no heater present on the setup as the water temperature can be adjusted according to the reading. The thermometer does not go with preference, as this will determine that the tank can meet the essential requirement for its continuity. 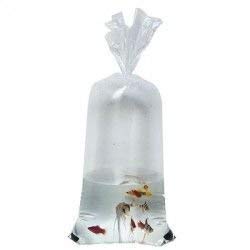 This bag will hold the shrimp while transporting the shrimp from where it comes, LFS or from its natural habitats like the sea or freshwater lakes, etc.

A container where the owner can store the shrimp before acclimatization. It can be of any form but it is usually better if it's transparent to easily determine the activity inside or any foreign objects can be spotted right away and it is important to remember that shrimp can be very stressed if it will just be introduced to a bright environment after transported through a dark container. A drip acclimatization method is generally the best way to get the shrimp ready before adding to the freshwater tank. An airline tube drip can be customized with regulated water current from the tank to the temporary container. This does not require any machines to be used as naturally, the water from the tank will be pulled out by the gravity.

There are a lot of options to use when transferring shrimp from the bag to the temporary container where the acclimatization will happen and these materials will help in getting the shrimp out of the bag from it from after transport. Although there are a bunch of materials listed, handling the transfer is different from one another as the idea is, the least stressful should always be the best route to go.

As the process will take a few minutes or hours to complete, the shrimp must still have food to consume in the process. If the tank has a non-living food source, commercial shrimp food can be purchased separately or if the tank contains living food options, a chunk of moss can from the tank can be an alternative option.

A step-by-step process of how to acclimate shrimp

Note: The owner has to make sure that the tank lighting is off within 24 hours to reduce the stress of the shrimp while the entire process of acclimatization is completed. The water from the bag and the temporary container should not be added to the tank after the acclimatization because it will allow parasite, fungus, or any unwanted substance inside the tank to propagate.

Being successful in what you do requires effort which is not always as easy as it sounds. A consumer will just look and pick for the pet store any animal for whatever purpose it may serve best but get those delicate animals to where it sets permanently requires more.

These things are essential because a lot of sources had been considered just to come up with the article to serve as a step-by-step guide in getting the shrimp to acclimatize before adding to the shrimp tank.

The process may look very technical as it is put in a precise order to guarantee a positive outcome when followed religiously but not at all times it is 100% accurate to whatever setup as it is still dependent on the owner’s perspective how to move along, the key there is to give the owner the knowledge of the process as it may turn out differently otherwise.

Along with efforts is the money spent to come up with the setup so it is only wise to get the best of this investment and in the long run, the return should be beneficial to the owner no matter whatever it is the owner wants to accomplish after all.